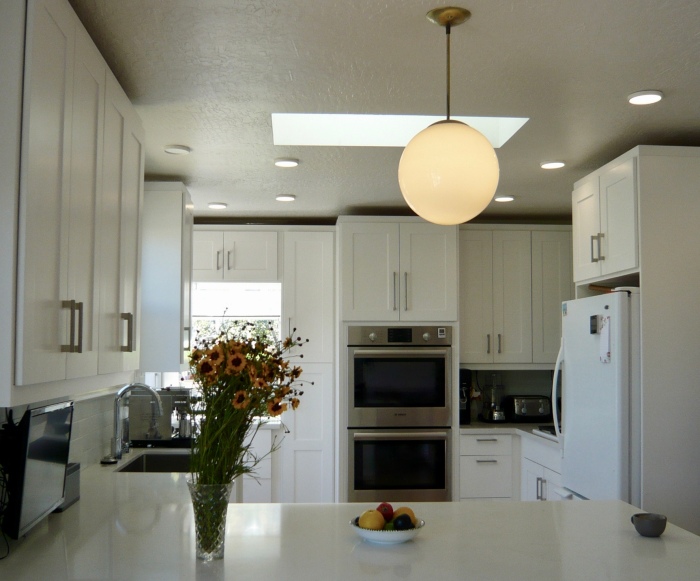 F36 was hired to design the replacement for a structurally failing deck, make improvements to the kitchen, redesign a bathroom, and add storage to this picturesque 1920’s cottage-style home. Combined, these tasks spurred two major objectives: 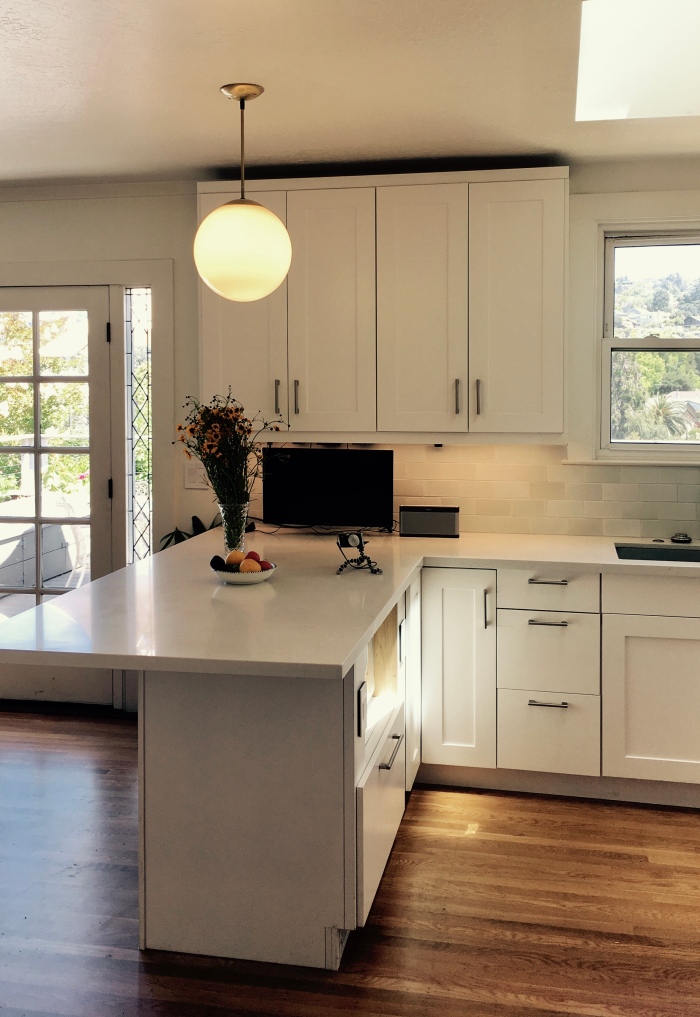 View of the kitchen peninsula towards the deck. 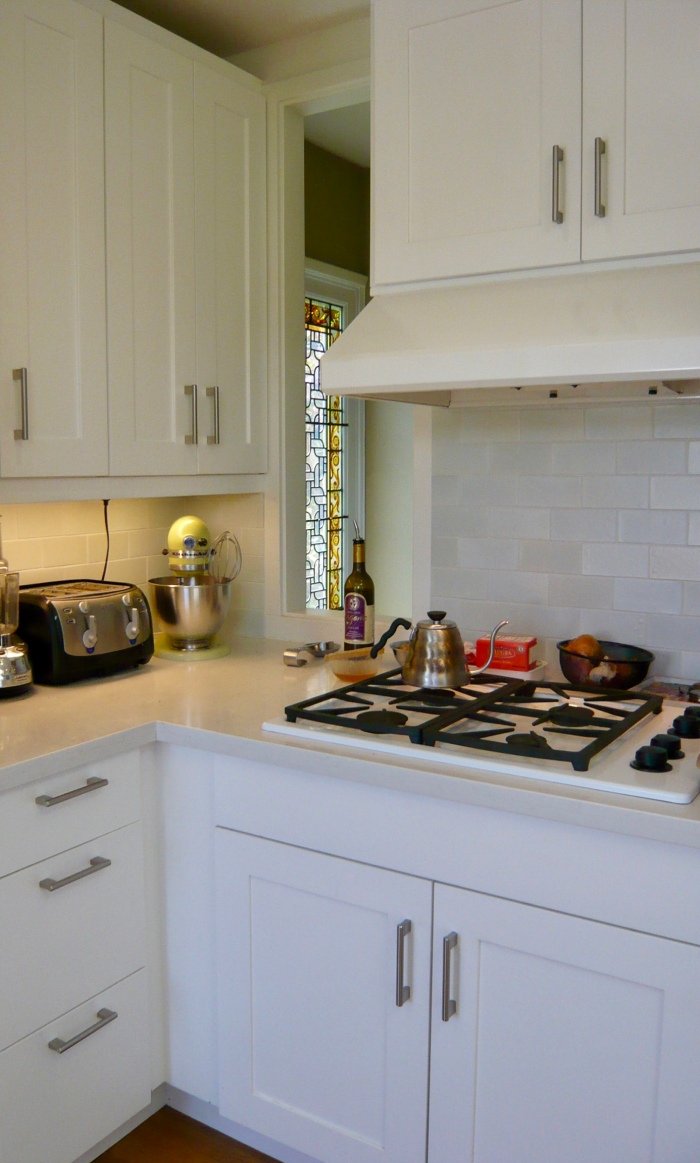 Image showing a corner of the kitchen opened up to an existing leaded glass window in an adjacent stairwell.

In terms of function, one of the major improvements came about by simply adding a service door between the kitchen and deck. The main foodie of the house cooks both indoors and out. Prior to the remodel, access between indoor and outdoor cooking was through the eating/gathering areas- a long haul, and at times peppered with guests. An isolated, unused nook in a deep corner of the kitchen was removed, and a door installed, allowing the cook to move freely between the kitchen and the outdoor cooking area without navigating around family and guests with heavy pots of water, red-hot pans, and dripping, snapping lobsters, etcetera. The interior dining area was previously underused, serving the family mostly as a drop-off for projects, gadgets, and holiday decorations long forgotten. The dining space was redesigned with a large L-shaped corner bench to encourage socializing while providing an abundance of seating for meals. 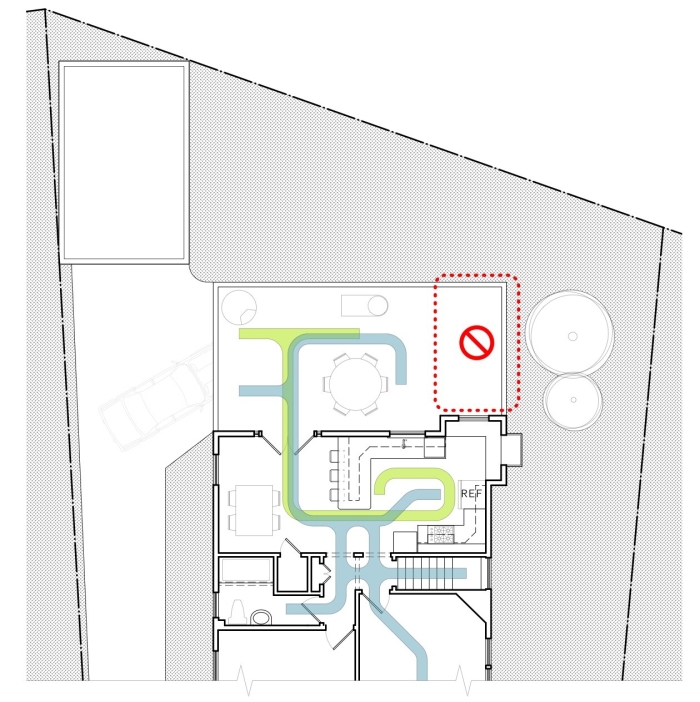 Circulation prior to remodel: general circulation is shown in blue, the cook’s is green. The intertwining paths were problematic, as was some of the general redundancy. The dotted red outline indicates area of deck failure.

Circulation after remodel: the cook no longer crosses paths with guests. A new door allows for a convenient outdoor cooking area. A simple relocation of the refrigerator allows easy access for everyone.

The bathroom was reconfigured for efficiency and designed to be simple and effortless to use. When redesigning the bathroom, we were able to improve storage and circulation in the areas immediately adjacent, reducing inefficiency in the floor plan.

A new bathroom entry vestibule provides storage for linens and a catch-all niche.

View past niche into bathroom.

An existing wood timber deck was replaced with stucco construction including interior storage and a carport below. The carport had been there all along; the new construction system eliminated drip-through that had plagued the car port in the past. The deck was designed with built-in benches for lounging and planters for growing herbs and flowers. These are arranged in a modern manner, and the cable rail’s minimal material accommodates the light, air, and views that make being outside so pleasurable.

Old deck from back yard- charming, but out of character with the house, and failing structurally.

New deck from back yard.

The character of this stucco cottage is light, bright, and clean. With previous renovations, work tended towards heavy and dark, which detracted from the nature of the existing architecture. Much of our work involved not only the functional undoing of prior remodels but also the aesthetic undoing of prior remodels. We set out to bring the new work into sync with the bright stucco cottage, opting for clean, modern lines that work with the nature of the existing house- white kitchen cabinets are illuminated by new skylight, and a previously dark corner of the kitchen opens to a leaded glass window previously hidden away in an adjacent stairway. Much of what existed in the area of renovation remains; the new work was designed to complement the existing house efficiently as possible.